Oh boy, it’s been a rough week out there for the Celtics faithful and after a 1-4 West Coast Road trip the Celtics are finally coming home for a much-needed home game this Wednesday against the Bulls. There isn’t a lot of positive to pull from this road trip, even the one win against the lowly Phoenix Suns required a 22 point comeback and a buzzer beater to force overtime, not exactly my idea of a marquee road victory. And while there’s a lot of questions surrounding this team right now and things don’t look great, we all must remember that this is a marathon and not a sprint. It’s only November and that if this ends up being the low point of this Celtics season I think we will all be looking back and joking about how people counted this team out of the Eastern Conference race after 13 games. So while the negativity is swirling let’s try to not play into that and look to what this team must do moving forward and identify anything constructive to build on.

For starters, I don’t want to hear that this team maybe isn’t as talented as we thought, because that’s just simply incorrect. They still are the deepest team in the East and it’s very easy to forget when exactly in the year that depth is crucial to a team’s success, in the goddamn playoffs! Even with the Sixers trading for Jimmy Butler over the weekend I wouldn’t trade this Celtics roster for any other team outside the Warriors. The key is  utilizing this team’s talent and depth will come down to Brad Stevens finding out exactly what lineups he can get the most production from, and those players learning to find their roles. It’s awesome to have the most talented team and all but when they haven’t truly gelled together yet or realized what their best suited to do in terms of helping this team, it can unravel quickly and that’s what I think we have seen a lot of so far. My best analogy for this team right now is that it’s like a Ferrarri that hasn’t been primed for peaked performance yet. Brad Stevens needs to get under the hood and get this thing doing 225 MPH and start running teams out of the gym each night. It’s certainly been frustrating to watch it sputter for 3 Quarters of each game and finally hitting top speed in the 4th when it’s too late to catch up and win. 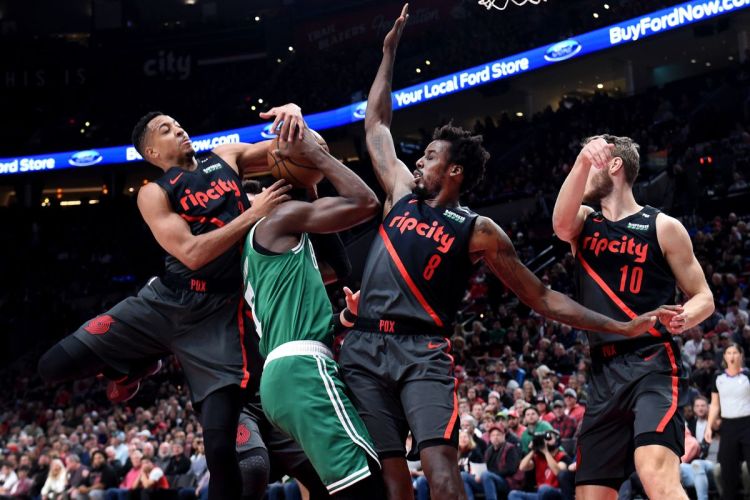 Another main concern of this team is their scoring, averaging 105.2 pts per game which ranks them at 25th amongst the league in that dept. While that sounds terrible, remember that they finished last season at 104 per game good enough for 20th in the league, not exactly great compared to other top NBA teams but we still finished 2nd in the East. I think certain guys on this team have struggled to find their stroke early on this year and have been hampered by terrible shot selection. We saw Tatum go for 27 last night and have seen Kyrie consistently fill the bucket up. If those two can lead the way and create separation for our other shooters and help Hayward and Brown find their jumpshots again this team will be stuffing stat sheets soon.

The Defensive end of the ball has been frustrating at times because we know this team can play better than this. We have all watched this team play lackadaisical on the defensive end for 2.5 to 3 quarters only to pick it up late in games and get themselves right back in it. It makes you want to scream at these guys to play like that for 4 quarters and then we will be the team with a 15 point cushion in the 4th. I know it’s tough for NBA players to show up on defense for 82 games and it’s a different mind-set come the playoffs, but I mean cmon… if they show up early on defense this team likely goes at least 3-2 or 4-1 on this recent trip.

Let’s all relax, this Celtics team will turn it around. Did we have our expectations set a little high pre season? Possibly. But this team should still be favorites to come out of the East this season and we shouldn’t doubt them because of one crappy early season road trip. Let’s let this team start gelling together and see where we are come December 1st before anyone hits that panic button. Keep the faith and support going for these guys going, you don’t want to be the guy that counted them out in November when they look like the second coming of the Warriors in June.